A Beginner's Guide to Photography - Part 2: Aperture and Depth of Field 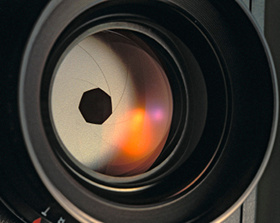 Now, I intend to take you to somewhat more treacherous waters and attempt to explain in a simple and comprehensible manner one of the most confusing concepts in Photography. And that's none other than Aperture of course. And one can't really discuss Aperture without touching on the impact it has on Depth of Field.

In simple terms, Aperture is the size of the opening in the lens when a picture is taken. This opening regulates how much light is allowed to reach the sensor and closely resembles the function of the pupil in the human eye. The larger the pupil (aperture) is, the more light enters the retina (camera sensor).

In photography aperture is expressed in f-numbers (for example f/2.8). These f-numbers, known as “f-stops”, are a way of describing the size of the aperture, or how wide or narrow the opening in the lens is. The following image illustrates lens apertures at different f-stops:

Pretty simple up to here, right? So why all the fuss and confusion around the concept of Aperture?

The following diagram will help you visualize the relationship between the size of Aperture and f-stop numbers:

So what is the impact different aperture settings may have on your photography? How are all of the above translated into images?

Well, as I'm sure you suspected, aperture plays a major role in determining what is known as Depth of Field.

In simple terms, Depth of Field describes the area of the image that is in focus; the area that appears sharp. The larger the f-number is (such as f/22) the more in focus both foreground and background are. On the other hand small f-numbers (like f/1.4) create a shallow Depth of Field and thus help isolate the object in focus from its background and/or foreground.

The following example is, I believe, self-explanatory:

As a general rule (and caveats apply of course) smaller f-numbers are preferable for portrait work, where you want to isolate your subject and make it stand out from its surroundings (creating in the process the much sought-after background blur a.k.a. "Bokeh"), whereas larger f-numbers (but not too large, as a phenomenon known as "diffraction" can cause you to actually get progressively less sharp images beyond a certain aperture) are ideal for landscape photography.

Moreover, lenses have a so-called "sweet spot" which usually describes the aperture value where the lens achieves its maximum sharpness. And make no mistake, in commercial photography sharpness is king! Exposure, colors and other parameters can be manipulated in post-production (especially in RAW files) to a certain extent, but not much can be done for sharpening up a photograph without ending up with too much "noise". A photograph either is or isn't sharp. Simple as that.

So I urge you once again to grab your camera and lenses, go outside and practice your newly acquired knowledge and turn it into skill. There's so much beauty out there and it's waiting for you to capture it with your photography!

And while you're at it I'll be working on Part 3 of this Beginner's Guide where I'll be disclosing the secrets of Shutter Speed.

Until then take care and stay tuned!