A Beginner's Guide to Photography - Part 4: RAW vs JPEG

I know, I know... You saw this coming a mile away... The never-ending debate of shooting in RAW vs shooting in JPEG (or JPG).

No matter how many square miles of editorial column real estate have been covered in the effort to get this resolved once and for all, beginners in Photography are still puzzled by it. This article aims to educate the amateur photographer on the subject through visual examples and offer the author's opinion while allowing readers to weigh their options and priorities and decide for themselves.

RAW is considered the digital equivalent of a film negative, hence frequently described as a "digital negative". It contains all the raw (hence the name), unprocessed information and detail from the camera's sensor without any losses.

JPEG (which stands for Joint Photographic Experts Group, the name of the committee that created the JPEG standard) is a lossy compression method for digital images. It processes the images in-camera and saves them at a fraction of their original size with some loss of information which cannot be recovered.

If one compares a correctly exposed RAW image and a JPEG image right out of the camera, one will notice tremendous differences. As RAW files are unprocessed, they normally come out looking flat and dark. In contrast, JPEG files will appear much more vivid and sharp. Take the following photo of a Masai mask as an example. See what I mean? 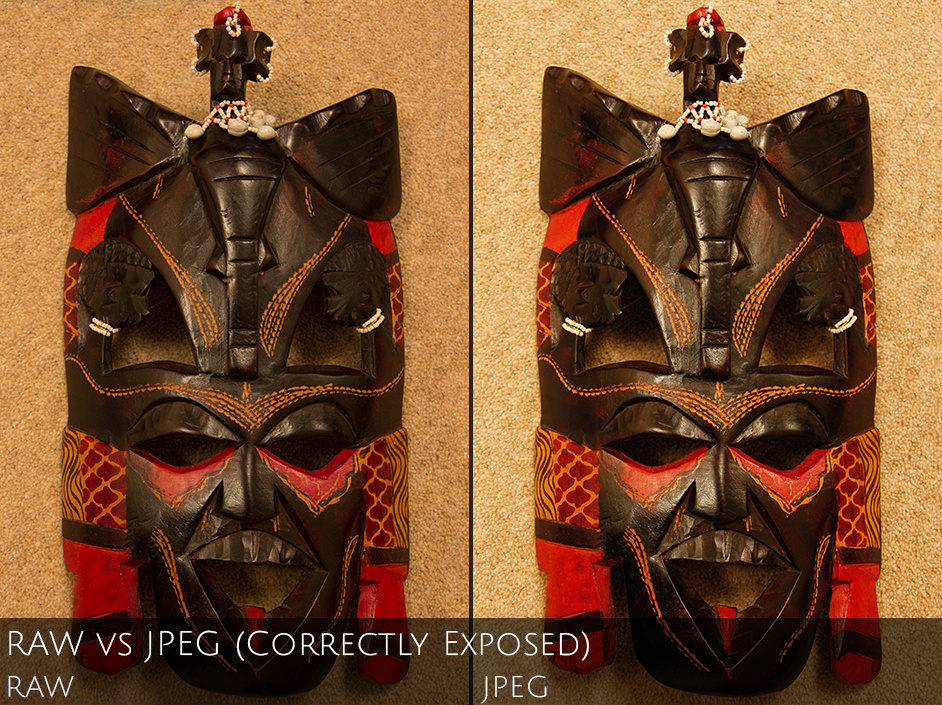 Moreover, RAW images need to be viewed and processed using your camera’s software or through more substantial imaging software such as Adobe Photoshop, Lightroom, Aperture, etc. prior to being ready for display or print. Depending on the photographer's workflow method this exercise requires a more or less significant time investment (especially when a large number of images need to be processed).

So why would anyone ever want to shoot in RAW and not JPEG and save themselves all the hassle?

Well this is where it starts to get interesting. You see, JPEG may be a shortcut to acceptable results (most of the time), but the JPEG files retain much less information than the RAW ones. And the consequences of this for both professional photographers and enthusiasts alike can be quite severe.

In post-production RAW provides the photographer with much more flexibility for adjustments in color, brightness, tonal range, white balance, blacks, sharpness and so on, as it retains all the original information the sensor captured while the photo was being taken. On the other hand, JPEG too can be manipulated, but with much less flexibility and with even more loss of non-recoverable detail.

The following two cases of an Overexposed and an Underexposed image will verify the above statement:

The following two versions of the same photo are the as-shot 2-stops overexposed images in RAW and JPEG format. No image adjustment has taken place yet: 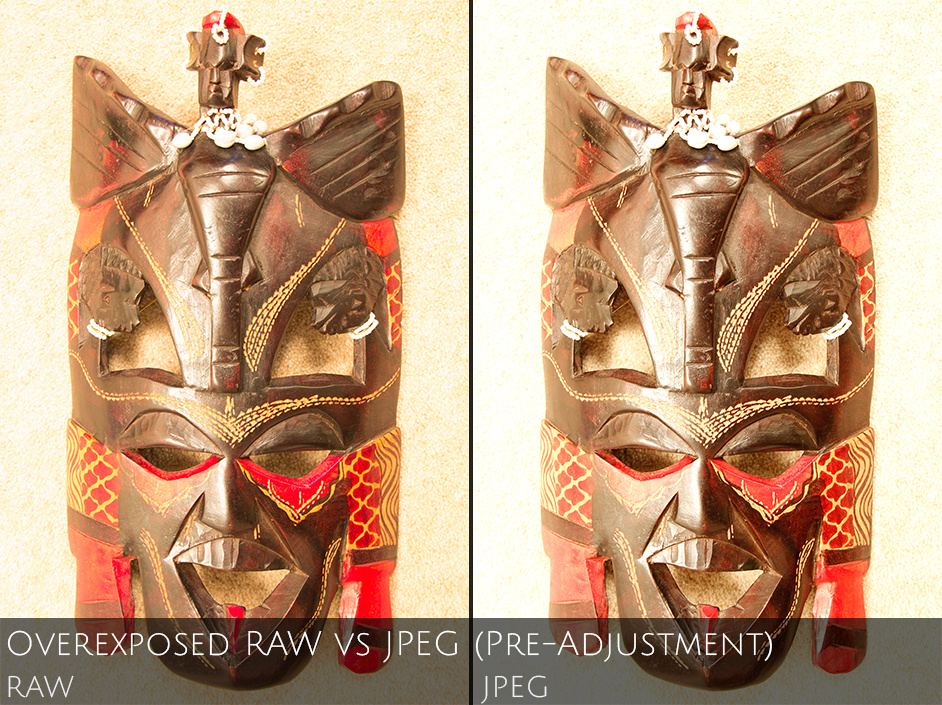 Already some differences, such as the better tonal range of the RAW image are apparent, but once the overexposure of both images has been corrected in Lightroom the difference in image quality is more than obvious: 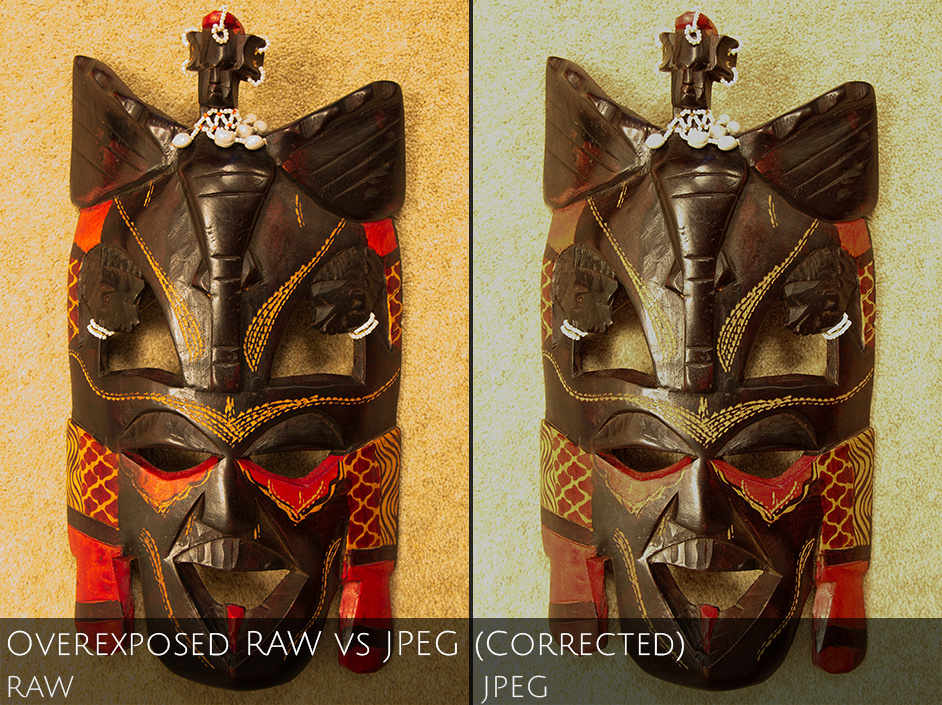 Obviously, the corrected RAW image is far superior to the JPEG one. It contains more detail in the highlighted areas, which could not be recovered from the JPEG image, as well as deeper blacks, better contrast, more vivid colors and a much better tonal range. And all of this through a simple exposure adjustment. No other parameters have been altered from the original images.

Similarly, the next two photos are examples of the as-shot outcome of a 2-stops underexposed image of the same subject: 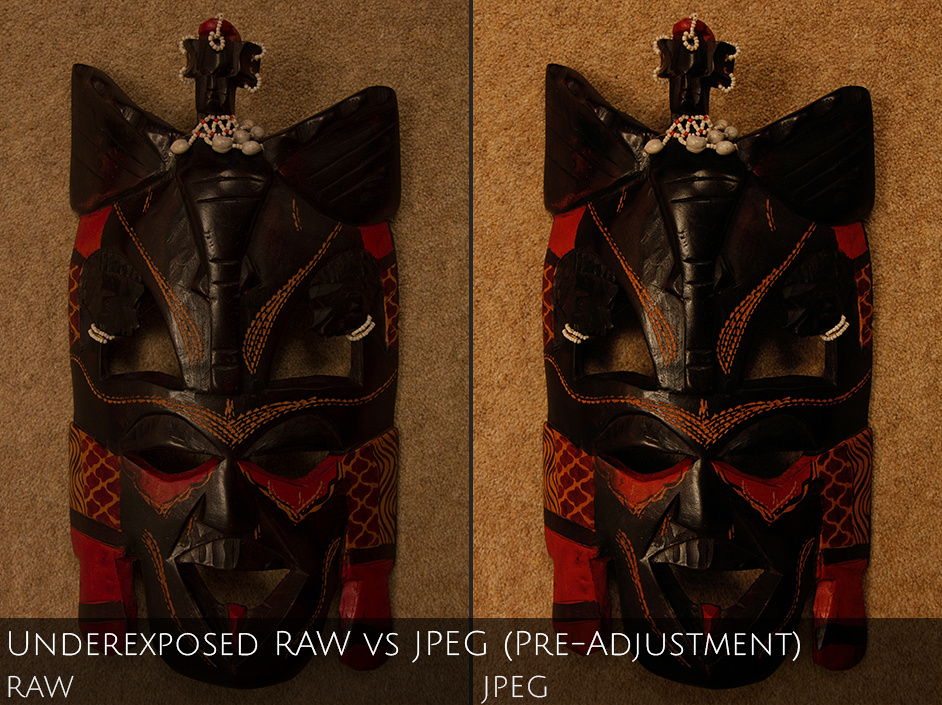 Initially, the original JPEG image appears to look "better" than the RAW one since it has higher contrast and sharpness, but a more careful look will immediately reveal how much more information is already present in the dark areas of the RAW image. As soon as the underexposure has been corrected though the difference is quite dramatic: 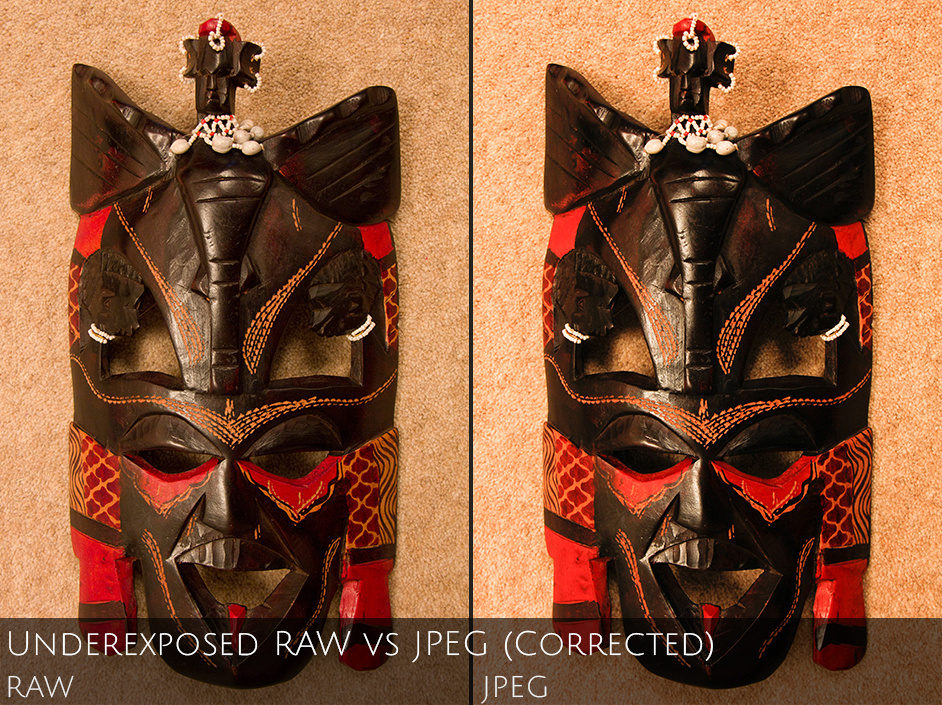 Again the only parameter that has been adjusted is the image exposure and already it is obvious that the RAW image has recovered much more detail in the dark areas than the JPEG one.

So now you're thinking: "Fine, we are convinced that RAW is a much more flexible and potent format than JPEG, but is it worth the time investment for a correctly exposed image? Is there enough difference between the processed RAW image and the JPEG one to justify the additional effort?" Well you can judge for yourselves, by examining the following side-by-side comparison of the final RAW image against the JPEG one: 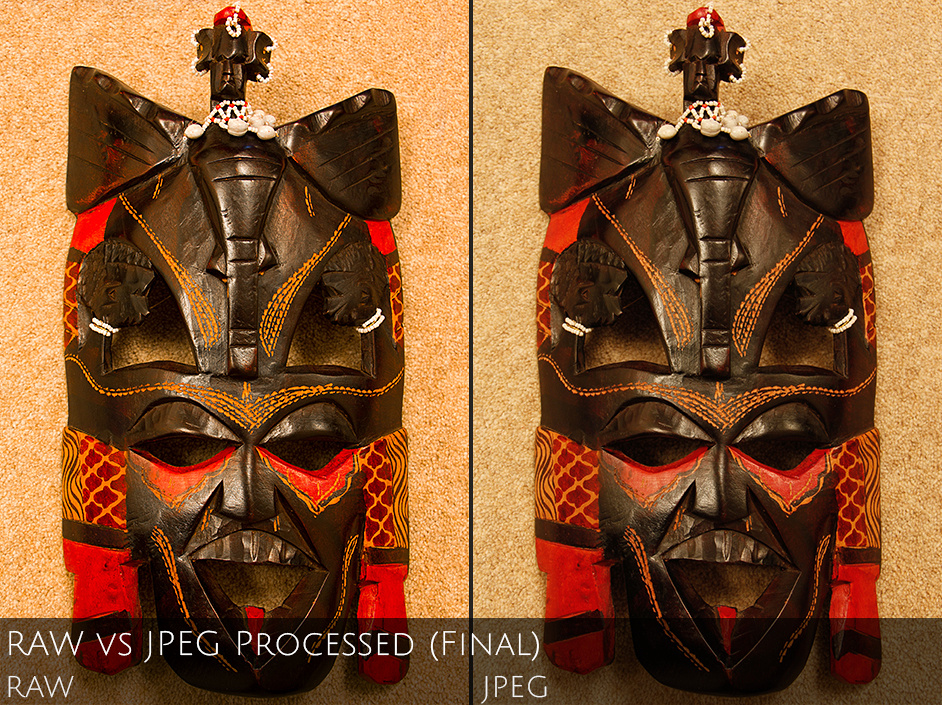 Clearly, the processed version of the RAW image is much "richer" than its JPEG sister. The image is sharper, the colors are more vibrant, the blacks are deeper and the highlights stand out, yet all the detail is there and nothing has been lost or "blown out". And bear in mind that this is not a tricky shot. The lighting conditions are under total control and almost uniform, which would not be the case in an outdoor shoot, where the photographer is trying to accommodate both light and shadow in the same photo and still maintain as much detail as possible. In that case the importance of post-production capabilities is paramount and shooting in RAW is a no-brainer.

So let's summarize the differences between the two formats and attempt to end this debate once and for all:

In my opinion the advantages of shooting in RAW far outweigh any advantages of shooting in JPEG. The ability to correct (within sensible limits of course) potential mistakes in post-production or recover details missed because of bad lighting without loss of quality is very important to any photographer. Moreover, the commercial photographer as well as the perfectionist enthusiast, demand some fine-tuning to the final product which in only possible through RAW if one wants to maintain the image quality.

On the other hand JPEG has its uses too. When you are casually shooting an event which you don't expect to have to post-process (such as a BBQ in the garden) you do not want to have to spend hours over your images with negligible advantages to the final product that quite possibly no one will ever notice. For occasions such as this JPEG will do just fine.

But what if you are unsure about what you will do with your photos? Well there is a solution for this as well. Most DSLRs allow you to shoot in RAW and JPEG simultaneously. This is the best of both worlds with the downside of the additional need for in-camera storage space and the longer buffering times required to transfer the two files to the memory card. This though becomes less and less of a real problem these days since there are currently memory cards with capacities of up to 256GB in the market which is more than enough space even for professional sports photographers shooting hundreds of hi-res photos at every event. By shooting RAW and JPEG simultaneously the photographer can decide later what to do with the material.

I hope you now have a much better understanding of the differences between the two dominant image formats in Digital Photography. If you have any further questions or comments on the matter, please post them in the "Comments" section below and I'll be more than glad to address them.